Mr. Mask, also known as Steve Joynt, is the owner, editor, and publisher of Mobile Mask. He graduated from the University of Virginia and earned a Master's Degree in journalism from the Columbia University Graduate School of Journalism in New York City.
He was a reporter for the Birmingham Post-Herald from 1985 to 2000. Among other awards, he was named to the Scripps Howard Editorial Hall of Fame in 1994. He authored a non fiction book, "Jack's Law: The Rise and Fall of Renegade Judge Jack Montgomery," published by Crane Hill in 1997.
Steve went to the Mobile Press-Register in mid-2000 as an assistant city editor. Among other duties, he was tasked with revamping the paper's coverage of Mardi Gras parades, as well as developing and assigning various feature stories about Mardi Gras.
Believing there was a need for even more coverage of Mardi Gras in this area, Steve left the Register in late 2011 to start Mobile Mask. In his spare time, he is an artist. You can get to his art web site by clicking HERE.

Mobile Mask started as a web site in January 2012. Our first magazine was published and went on sale in January 2013, serving as a guide to the 2013 Mardi Gras season. It was 68 pages and saddle-stitched (stapled). The 2018 issue was 100 pages and perfect-bound (flat binding, glued).
The Mask is a web site, a Facebook page, a Twitter feed, and an app (available for free on iTunes and the Play Store). But the real backbone of the operation is the magazine.
Our goal from the start was to give Mobile an attractive, informative guide to Mardi Gras. So many of our readers and followers tell us that we have enhanced their Carnival season, and we can think of no greater compliment.
Mobile Mask is completely independent, a property of Thrown Ventures, LLC, which is solely owned by Steve Joynt. 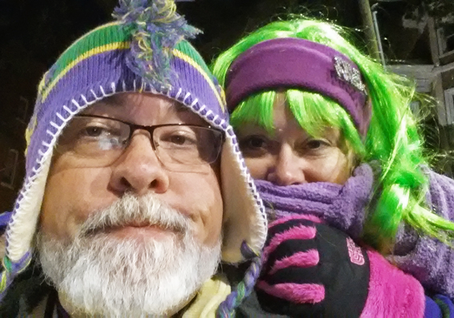 Our beloved critters, Mac and Shorty

Mrs. Mask on Church
Street before the 2018
Mobile Mystics parade 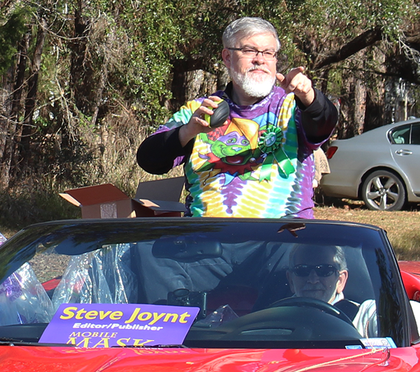 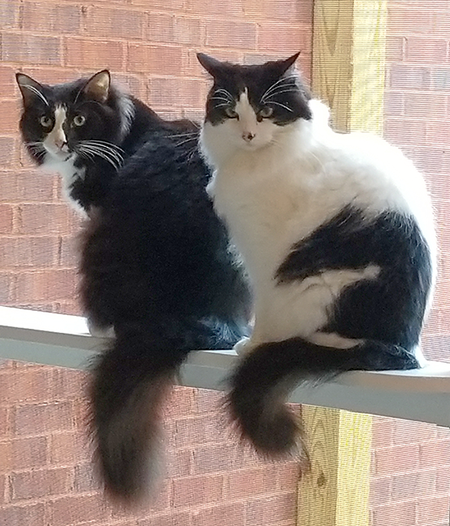 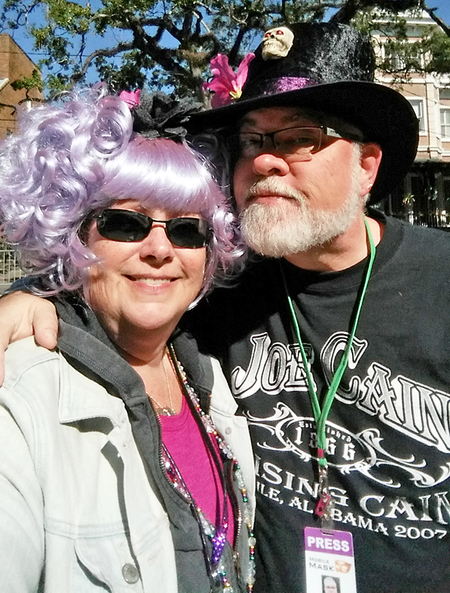 Mrs. Mask, also known as Nancy Joynt, is the Technical Director of Mobile Mask. A graduate of the University of Virginia, Nancy's technical expertise in computers and the print industry help keep Mobile Mask going.
Nancy started her career as a typesetter for a printing house in Birmingham. She then landed a job as a trainer for Compugraphic Corporation (Boston), traveling across the country most of the year to train operators in other print shops how to use Compugraphic products.
When Compugraphic was purchased by AGFA Corporation (New Jersey, Belgium), Nancy went to work for AGFA, where she remain - still traveling, teaching, installing, and troubleshooting.
On top of her technical tasks and proofreading for Mobile Mask, she shoots the parade video. She is something of a fixture on the parade routes, and many maskers know of her weakness for doubloons. 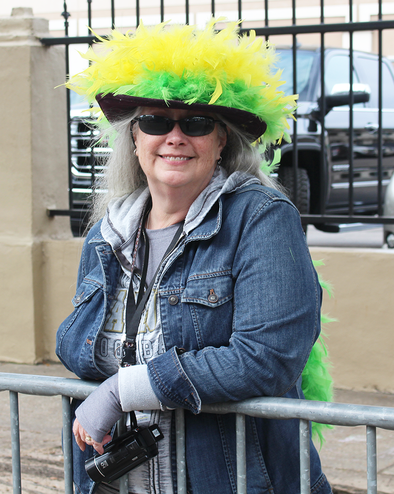 Mr. Mask, serving as
Grand Marshal of the
Dauphin Island People's
Parade in 2018