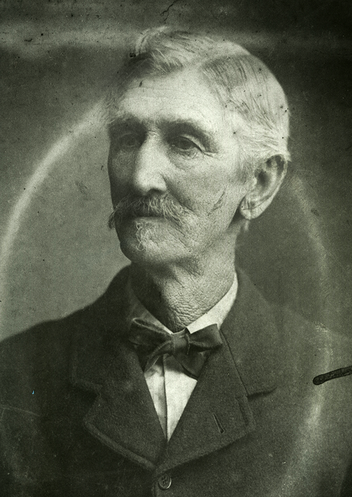 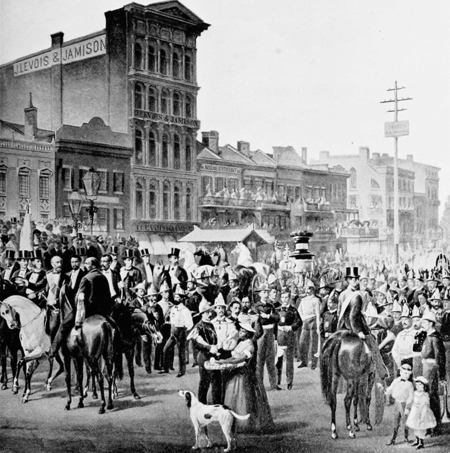 Joe Cain Day
A Unique Celebration
Since 1967, the Sunday before Fat Tuesday has been known as Joe Cain Day in Mobile, Alabama, to honor the man who got the Mardi Gras ball rolling in 1868.
The celebration was established by local historian Julian Lee "Judy" Rayford, who believed Cain to be Mobile's most important historical figure. In 1966, Rayford had the bodies of Cain and Cain's wife, Elizabeth Rabby Cain, disinterred from their burial plots in Bayou La Batre and reburied in the Church Street Cemetery in downtown Mobile.
The next year, Rayford, dressed as Cain's Indian chief character, Slacabamarinico, led something of a jazz funeral procession through downtown streets to the Church Street Cemetery. Rayford made it an annual event and passed the torch to J.B. "Red" Foster, who portrayed Ol' Slac for 15 years.
Wayne Dean Sr. has portrayed Chief Slac in the Joe Cain Procession - the centerpiece of Joe Cain Day - for more than 30 years now. The procession has become one of, if not the, most popular events of Carnival in Mobile. Many revelers say that Joe Cain Day is their favorite of the season, and they especially like the family atmosphere. Folks set up grills and tents all along the parade route, and Joe Cain parties are held in homes and yards throughout downtown.
At one time, the procession was known as The People's Parade because, quite simply, anyone could show up with a homemade float and join in. It got so big, however, that the police department had to cap the number of units in the procession.
For the most part, these are not the fancy floats, covered with mythical figures or cartoon characters, used by the other parading societies. For Joe Cain, it's usually a neighborhood or a large group of friends building plywood floats on trailer beds. Some even use old school buses. The groups have names such as the Mystic Order of Dead Rock Stars or the Cain Raisers Society.
In 2015, the Joe Cain Marching Society obtained its own parading permit and processed right behind the floats, led by Wayne Dean. The separation was the result of a disagreement between the Marching Society and the Joe Cain Parading Society, but the result may just mean an even longer parade.
Another big part of Joe Cain Day is a mystic group formed in 1974, known as Cain's Merry Widows. These ladies dress all in black, including veils, and they zealously guard their true identities. The whole idea of the group is perfect Mardi Gras comedy, since Cain only had one wife. These 20 or so ladies (their character names include Sue Ellen, Scarlet, Emmy Lou, Pearl, Tara, Savannah, Gertrude, Salome, and Mary Jane) make several appearances downtown during the day.
Crowds love the ladies' reputation for prodigious drinking and their constant bickering over which of them Joe loved best. Their throws - black beads, black roses, and black garters - are among the most coveted of Mobile's Mardi Gras. The widows first travel to the Church Street Cemetery to wail over Cain's grave. Then they visit the Joe Cain house on Augusta Street to toast his memory. Lastly, they ride a black bus in the Joe Cain procession.
In 2003, another group of mysterious women sprang up to take part in the Joe Cain Day festivities, the Mistresses of Joe Cain. These ladies, while they wear large hats with veils, hardly look like mourners, since they're dressed entirely in bright red. They walk in the procession and hand out red roses adorned with red ribbons, with their noms de Mardi Gras stamped in gold.
At last count, there were 20 Mistresses, with names such as Zora, Scarlet, Bee, Garnet, Kitty, Tallulah, Jezzie, Belle, Ruby and Gizele. Unlike the Widows, the Mistresses "don't cry over losing Joe. We celebrate his life, and he is with us always because of course he loved us best!" according to Zora.
Sometimes the Mistresses and Widows get into a mock catfight before the procession gets started.
To make it a full day of events, there's a 5K race called the Joe Cain Classic, which always ends with a party in front of the Joe Cain house. MAMGA's King Elexis I arrives at the foot of Government Street and precedes the Joe Cain Procession with a long motorcade. After the Joe Cain Procession, Le Krewe de Bienville parades at 5.
All over Mobile on the following Monday, there's plenty of tired folks doing their best to rest up for Fat Tuesday. 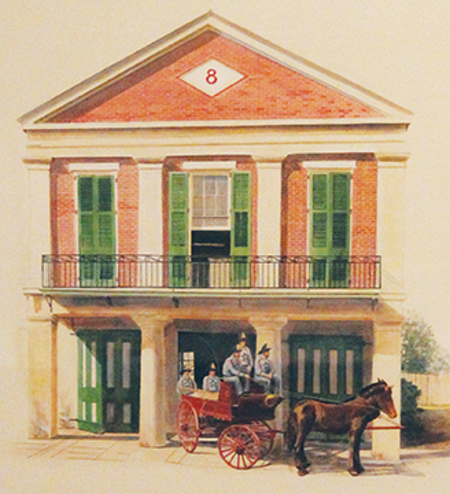 To learn about and understand Joe Cain is to begin to understand modern Mobile Mardi Gras. Normally, the feature stories published in Mobile Mask magazine do not appear here on the web site. However, this 2015 magazine story about Joe was so important that we have published it here. Below the story, you'll find additional info about Joe Cain Day.