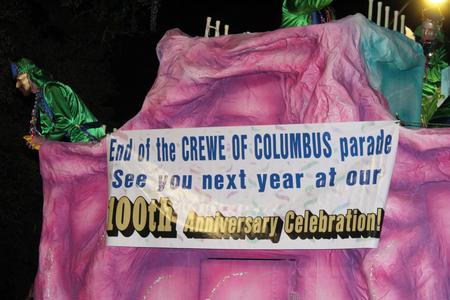 The Effects of COVID-19 on Mardi Gras 2021
March 26, 2020: The COVID-19 pandemic is only starting to make itself felt in the Mobile area, affecting all aspects of our lives.
Those in the Mardi Gras community know that even though Fat Tuesday is more than 10 months away, the pandemic is affecting their timelines.
All agree that they have to move forward, as if Mardi Gras 2021 will go on as scheduled. The question is exactly how to get there, with important meetings being canceled or postponed, elections to be held, even events and fundraisers coming up soon.
Mobile Mask surveyed some mystic societies and others in the Mardi Gras community and found that everything being on hold – for now – is affecting some important events on their schedules.
One president said his organization has postponed its Annual Meeting. “We plan to evaluate the situation again the week of April 6, with the hopes that we can have our meeting at the end of April or postpone again until late May.”
His organization may have to cancel its annual family day at their float barn. Planning is moving forward for the group’s big fundraiser coming up in August.
Reportedly one group has canceled its Annual Meeting but will conduct its election on paper ballots. The ballots must be placed in a ballot box on a specific day.
Judi Gulledge, executive director of the Mobile Carnival Association, said she has been receiving questions that simply don’t have answers at this point.
She did point out that when the economy takes a downturn, mystic societies and other organizations feel it in their budgets, too, because some members drop out. That can cause a board to make different decisions about spending.
“One thing I do know,” she said, “is people find a way to celebrate Mardi Gras in Mobile.”
The Mobile Mardi Gras Parading Association has its next meeting scheduled for April 8, and most likely that will be canceled. The organization’s last meeting before the summer break would normally be held May 13.
For one organization, Mardi Gras 2021 is especially important. The Crewe of Columbus will be celebrating its 100th anniversary, and details such as theme and floats, costumes, and ball are moving forward as they should.
According to the Admiral of the Crewe, the organization’s Annual Meeting, scheduled for April 20 may very well be postponed. For the Crewe, and most other organizations, the summer is normally not utilized for meetings, so pushing some dates forward will be less difficult.
One mystic society held its Annual Meeting on March 12, before any restrictions were widespread. The Board has canceled the April meeting, when the Queen and Emblem and Ball Chairman are normally announced. They will instead make those announcements live on their Facebook Page.
Still another organization has simply suspended meetings for the time being, and its Board is handling business via text messages. “We are unsure of the effect this will have going forward,” one Board Member said.
Just for historical context, Mardi Gras in Mobile has been officially canceled twice in modern history.
During World War I, referred to at that time as The Great War, Mardi Gras was officially canceled in 1918 and 1919. Interestingly in 1919 Mobile’s Board of Health recommended canceling 1920 Mardi Gras as well because of the pandemic of the so-called Spanish Flu. The City Commission refused to cancel, but the festivities were trimmed down.
And during World War II, there were no parades between 1942 and 1945.
In New Orleans, Mardi Gras was essentially canceled in 1979, due to a police strike.
Other than that, storms, floods, fires, recessions have beaten down Mardi Gras organizations – even put a few of them out of business – but as Judi Gulledge said, “people find a way to celebrate Mardi Gras in Mobile.” 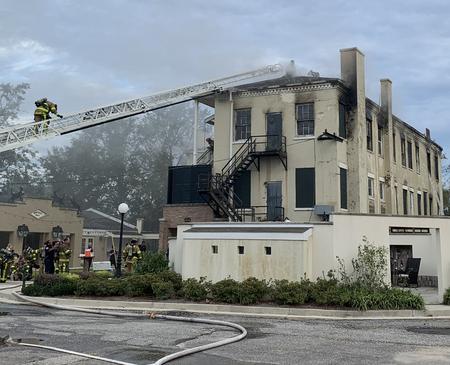 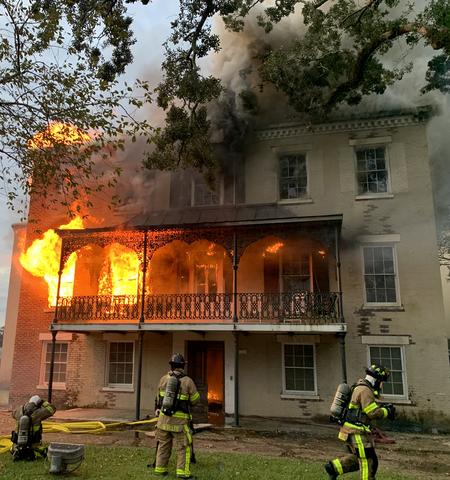 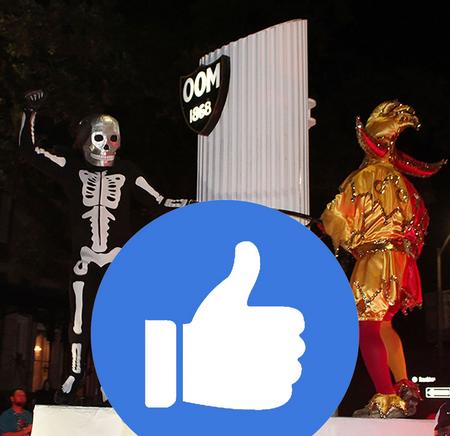 Infant Mystics Den Suffers Substantial Fire
October 8, 2020: Cotton Hall, the mid 19th century Late Federal-style building that serves as a den for Mobile’s second-oldest Mardi Gras parading society, became engulfed in flames early this morning.
Called in at 6:49 a.m. by an off-duty firefighter from Engine 8, the responding units found “heavy flames and thick, black smoke visible from the 3-story” building, according to Steven L. Millhouse, public information officer for the Mobile Fire and Rescue Department.
Less than 20 minutes after arriving, fire officials on the scene declared the blaze a three-alarm fire. Before it was over, 11 engine companies, four ladder trucks, and more than 60 firefighters had been sent to the scene.
No one was injured in the blaze, and no cause has been determined. The fire department did not say if a point of origin had been determined.
Ladder companies cut two 4-foot by 4-foot holes in the roof to let gases, heat, and smoke escape from the building, Millhouse said. He said that while “much of the interior suffered significant damage from flames, smoke, and water, the structure remains intact.”
Tonight, this statement was released by the Infant Mystics: “The Infant Mystics and the Board of Directors, officers, and benefactors of Historic Restoration Society, Inc., are extremely grateful for the efforts of the Mobile Fire Rescue Department in battling this morning’s fire at Cotton Hall. First and foremost, we are thankful that no one suffered any physical harm.
“Secondary to that, though, the very fact that the building remains standing serves as a monument to the professionalism and dedication of the Department’s firefighters. We wish to convey our sincere appreciation to all of the firefighters and other first responders who answered this morning’s alarm and assure each and every one of them that their bravery and skill will be forever admired by us all.”
Originally known as the Protestant Children’s Home, the building was designed by Henry Moffatt of Philadelphia, and construction was started in July 1845. It was built as an orphanage, initially for protestant children whose parents died of yellow fever.
The structure was ready for occupancy on March 31, 1846, and was designed to house up to 40 boys and girls. Boys were housed until the age of 12, when they were expected to enter the workforce. Girls could remain until the age of 15, although some stayed until 18. The children attended public schools. A vegetable garden was planted on the 2-acre property, and a milk cow was always present.
Over the years, major renovations were done and wings and buildings were added to the property. It served as an orphanage until 1970.
The Protestant Children's Home was added to the National Register of Historic Places in 1973, and it became the location of Mobile City College. In 1985, the building housed Mobile Business College. After several other uses, it sat vacant until it was purchased in 2014 by the Historic Restoration Society, a nonprofit formed by David J. Cooper Sr.
Between $2 million and $3 million was spent refurbishing the building in what was universally hailed as a grand and gorgeous result.
The complex, which will eventually house the floats of the Infant Mystics, was named Cotton Hall in honor of the IMs, whose logo includes a cotton bale because so many of the original members were in the commercial end of the cotton business.
The main building was in more-or-less full use by 2018, and the Maids of Mirth have held their Mardi Gras ball there for the last two years.
Weddings, fundraisers, and other events have been held there throughout the calendar year. 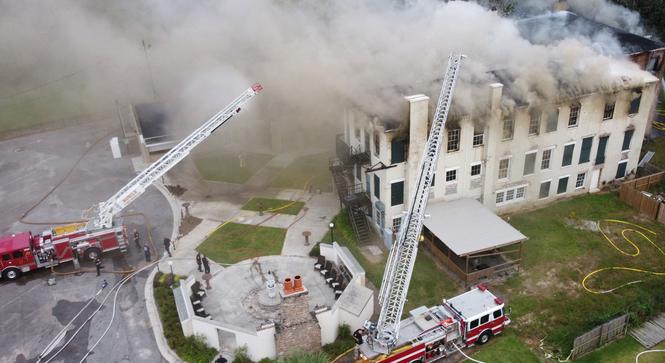 At the end of this year's Crewe of Columbus parade, the group touted its upcoming 100th anniversary

This is a blog of Mardi Gras-related news items from the Mobile area and elsewhere on the Gulf Coast: 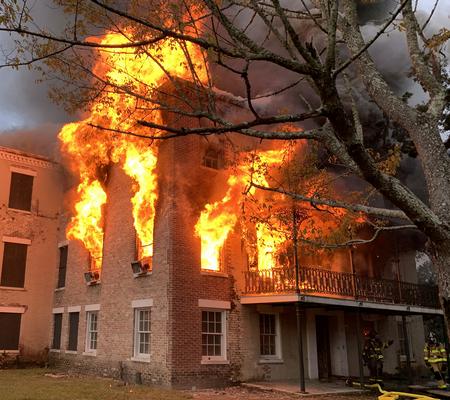 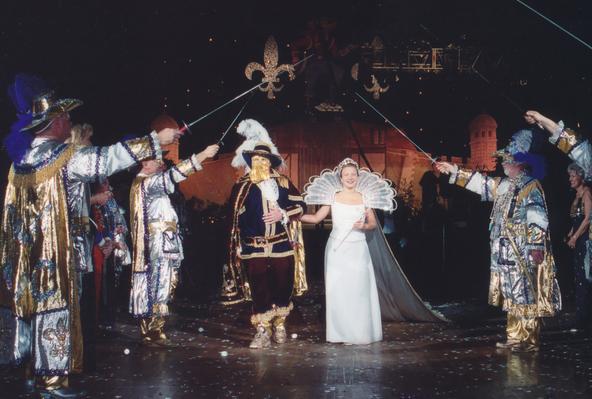 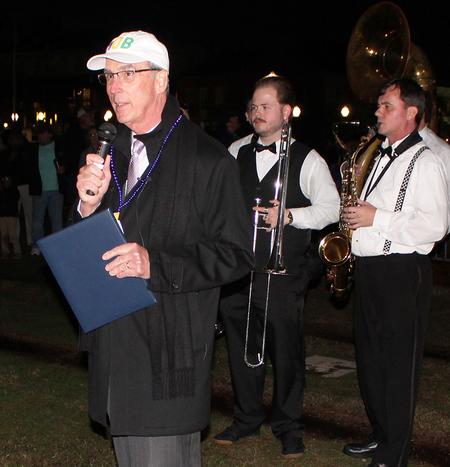 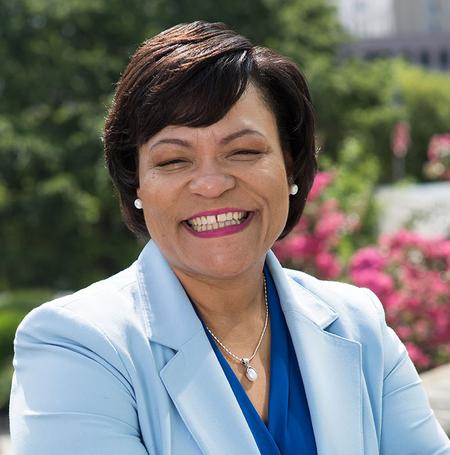 Groups Receive Civic Center Rules for 2021
September 10, 2020: The ball chairs of the 16 or so Mardi Gras organizations that use the Mobile Civic Center for their fancy-dress balls have received a long-awaited letter from ASM Mobile, the company that manages the Civic Center, the Convention Center, and the Saenger Theatre.
The big news is that the Civic Center and Convention Center are, at this point, willing to host Mardi Gras balls in this age of pandemic.
Dated September 9 and sent by email, the three-page letter was attributed to Kendall Wall, general manager of ASM Mobile.
To read the letter in its entirety, click HERE.
Some of the big takeaways include:

Groups will soon start meeting with their Event Managers to iron out specific plans, which must be finalized at least 30 days before the ball.
"This is a situation where we're all going to have to be as flexible as we can," Kendall Wall said today. "But they're trying to make plans, and so are we. We have to move forward."
Wall sent a similar letter to the half-dozen or so organizations that use the Convention Center for balls.
The ASM Mobile staff has been working closely with the Mobile County Health Department, Wall said, and "we know these organizations have been thinking about all of this. We're really anxious to see what they've come up with, too."
One organization, he said, has talked about putting up a big tent outside the Civic Center to help spread everyone out. "We've never used the Theater before, but maybe we could do that, use it for food or a VIP area. There's a lot of possibilities."
Wall said he knows that cost will be a big consideration, since the biggest organizations will have to cut their ball attendance by more than half. "We are really going to try and work with them on pricing," he said.
"The governor's current order runs out October 2, and we'll see what she does at that time," Wall said. "So much has changed in a short period of time. There's no reason to think that things won't continue to change, and we'll alter plans with those changes." 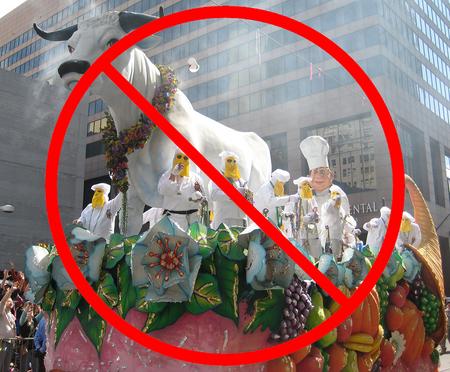