Formed in Prichard in 1995, the Krewe of Goats was created to commemorate an area folk hero of the 1920s, known only as the "Goatman."

According to the group, there really was no Mardi Gras in what is now Prichard, but a frail man in the Bullshead community, who kept a small herd of goats, decided to give area folks some Mardi Gras fun.

He would hitch his goats to a homemade cart and travel up and down the narrow, dirt roads, "singing and screaming for all to come," according to the Krewe. He tossed homemade trinkets and treasures to children and adults, and they would "snatch and grab at the trinkets as if they were gifts from heaven. The man did this unselfishly until he was no longer known on this earth."

The Krewe of Goats parade is led each year by a different emblem, someone from the Mobile area who is bestowed with the honor of being the "Goatman."

This year's honorary Goatman will be TaMorris "TJ" Pettway, executive director of Public Works in Prichard.

The Krewe of Goats parade will be held on February 26 at noon. 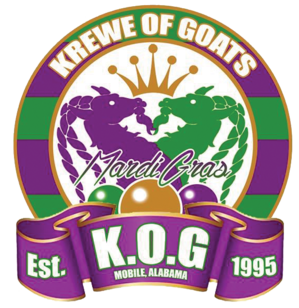