Mardi Gras-Style Bowl Parade Will Roll Dec. 22
December 16, 2016 - This year’s pre-bowl-game parade will be held Thursday, December 22, at 6:30 p.m. and will follow the so-called Modified A route. The map accompanying this article shows the exact route, which essentially starts at the Civic Center, takes Government to Bienville Square and heads south on Royal.
Dubbed the Greer’s Markets and Cashsavers/AL.com Mardi Gras Parade (that’s a mouthful), it will include at least 20 floats – making it bigger in that respect than any single regular-season Mardi Gras parade. However, if you count up the floats of multiple groups parading one after the other, for example, the Mobile Mystics and Mobile Mystical Revelers on February 18, that will have a total of 30 floats.
Bring a bag, because there will be plenty of throws as several Mardi Gras organizations will be represented in the bowl-game parade, including the Mystics of Time, Mobile Mystics, Neptune’s Daughters, MAMGA, Conde Cavaliers, MLK Monday Mystics, Order of Athena, Order of Angels, Pharaohs, Order of Osiris, and Order of Doves. The participants in the first-ever Dollar General Bowl, the University of Ohio and Troy University, will supply marching bands, cheerleaders, mascots (Ohio is the Bobcats, and Troy is the Trojans), as well as coaches, athletic directors, and other dignitaries riding in convertibles.
Currently, extended forecasts for December 22 show a high in the upper 60s and low in the very low 50s. The chance of rain is slim. That, of course, can change dramatically. Last year, the parade before the last bowl game to be sponsored by GoDaddy was canceled because of storms.
Maybe Dollar General can bring some weather charm to the party. After this year’s parade, there will be a pep rally in Bienville Square, followed by a street party on Dauphin Street. The game itself is scheduled for Friday, December 23, at 7 p.m., and it will be televised on ESPN.

BREAKING
Town of Dauphin Island to Hold its Own Parade
December 7, 2016 - After a shaky last few years, the Island Mystics (the second Dauphin Island parade) has called it quits, quite possibly for good. Upon hearing that news, the Dauphin Island Town Council decided Tuesday night that the town itself would put on the island’s second Mardi Gras parade of the season.
The Krewe de la Dauphine, which is celebrating its 25th anniversary, will parade on January 28, and the Town of Dauphin Island parade will be February 4, the date the Island Mystics would have rolled.
“Both Dauphin Island Mardi Gras Parades are critical to our small economy during the off-season,” Council Member Gene Fox wrote on his Facebook page. “This will be a people's parade that will be similar to the concept of the Joe Cain Day Parade in Mobile.” The actual name of the parade and plenty of other details are, of course, pending.
Anyone responsible for putting on a parade, even a neighborhood parade, can tell you that putting one together from scratch in 60 days is a tall order. “It’s going to be tough,” Fox told Mobile Mask. “But the Mayor and I got together about three weeks ago to talk about this, and I’ve been quietly getting various businesses and groups to commit to putting in a float or sponsoring a truck band, so we have made a start.”
One of the biggest questions was answered, he said, when the town determined that its municipal insurance policy would cover the parade. Fox said he expects the parade to have a section of decorated boats on trailers that hearkens back to Island parade days before KDLD and the Island Mystics.
The vision, Fox said, is for this to become the new second parade on the Island for years to come. “Eventually this thing has to fly without me,” he said. “We need to set it up in a way that it will go on for years to come. The town and our businesses and the people need to be able to count on it.” In the coming days and weeks, the town will announce a process to sign up “your float, horse, boat, classic car, foot marching group, flaming baton twirling group, or band for the parade,” Fox said, and Mobile Mask will post those announcements on its Facebook page.
Wayne Dean, a recognized Mardi Gras author and historian who has portrayed Chief Slac in the Joe Cain Procession for more than 30 years, has agreed to be something of a parade consultant for the town. "I think it's a great idea,” Dean said. “Over the years people have been wanted to be more and more involved in Mardi Gras. Plus old Joe Cain ‘hisself’ lived his last years in the Bayou, so it is fitting that this type of parade be started."

BREAKING
Cruise Terminal No Longer Option for MG Balls
April 15, 2016 - While the Civic Center – for now – remains available for Mardi Gras balls, a different location has been taken off the table. Mobile Mask has learned that the Mobile Alabama Cruise Terminal will no longer be available for Mardi Gras balls or other social events, due to the return of a Carnival Cruise Line ship to Mobile.
“We’re just not going to be able to do it,” cruise terminal director Sheila Gurganus said. “I wish we could do it. It was fun having them here.” Even if a ball were held while the ship is at sea, Gurganus said, “our parking will be filled up.”
During the 2016 Mardi Gras season, the cruise terminal hosted seven Mardi Gras balls, as well as the Mobile Area Mardi Gras Association’s New Year’s Eve party. Gurganas said all of the groups that previously held balls there have been made aware of the situation.
It’s not yet clear where all of those organizations will go in 2017, but the February 11 Joy of Life Mardi Gras Ball, which benefits St. Jude’s, has already made arrangements with Fort Whiting.
The other balls held at the cruise terminal in 2016 were Don Donas, Moonlight Maidens of Mobile, Mobile Mystical Ladies, Le Krewe de Bienville, the Prichard Carnival Association, and the Crewe of Columbus Queen's Ball.
The cruise terminal, opened in late 20014, became a location for small Mardi Gras balls after Carnival left Mobile in October 2011. In 2012, the terminal hosted one ball – Le Krewe de Bienville – and the number has grown since then.
Other efforts to put the $20 million cruise terminal to some use in the absence of an actual cruise ship have included wedding receptions, proms, and large meetings. Carnival will base the cruise ship Fantasy, the oldest vessel in the company’s fleet, out of Mobile for at least 13 months, starting with the first trip on November 9.
So far, Mobile has had Carnival Holiday and Carnival Elation based here. Carnival Fantasy was slated to be here in 2009, but Elation was brought in, and Fantasy was sent to Charleston, S.C.
Obviously having the terminal operate for a cruise ship is far more lucrative and important than providing an alternative to small Mardi Gras groups, but those groups will have to hunt down new locations.

BREAKING
Last-Minute Route, Time Changes Confirmed
January 20, 2016 - Mobile Mask has confirmed with Mobile Police that last-minute route and time changes have been made, affecting the Lundi Gras night parades and the last parade of the season.
Route F, being used only by the Infant Mystics and the Order of Doves on Lundi Gras night (Jan. 8) has changed yet again. The route was created last year at the request of the IMs and changed radically earlier this year, again at the request of the IMS.
This new, new, new route, which has only emerged in the last couple of days, will not end at Government and Broad as the current maps show. Instead it will end at the Civic Center, turning down Claiborne after circling Bienville Square. That cuts off Government from Claiborne to Broad Street during the return trip.
The route still starts near the new IM barn and den at Conti and Broad. That will surely cause some logistical challenges as bands and other units in the IM and OOD parades try to get their vehicles from the starting point to the end point.
Also, the IMs have changed their start time again from 7 back to 6:30. 2015 was the first year the IMs intended to start at 7 but because of weather, they had to start at the standard time of 6:30. This year, they scheduled themselves again for 7, but changed back to 6:30 when the route change was made, according to police.
The other major change is to route C, which is only used by the Order of Myths. At the group's request, some changes were made to that route this year. Now, because of construction at Mardi Gras park, the parade will not go all the way down to Royal on Government and then turn up Royal on its return trip.
Instead, the parade will go back the way it came - up Conception from Government, right on St. Francis, left on Royal. It actually makes the new Route C look a little more like the old Route C.
Mobile Mask has already changed the parade schedule on its web site and will replace the old route maps by Monday. Changes to the Mobile Mask app will take longer and may or may not go through in time. We will send out notifications when those changes are made. 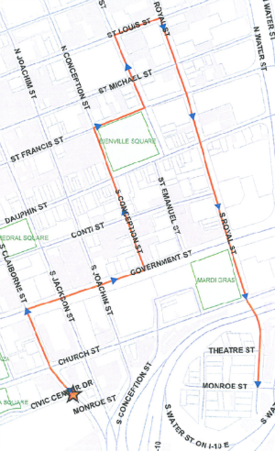 Here is an archive of the Mardi Gras News items that appeared on the Mobile Mask web site in 2016.