This page is especially for news and other items concerning the COVID-19 pandemic.

A decorated car from the predecessor to Mobile's Floral Parade, shortly before World War I 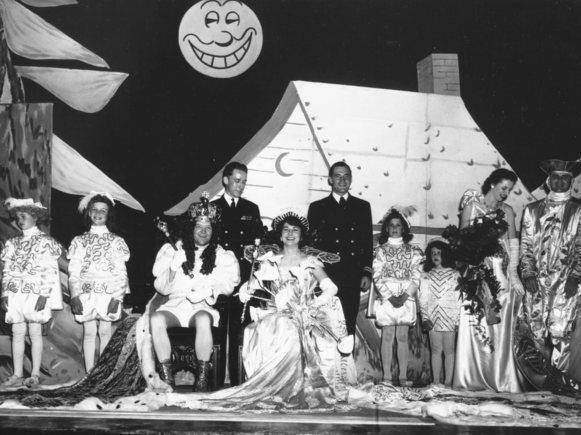 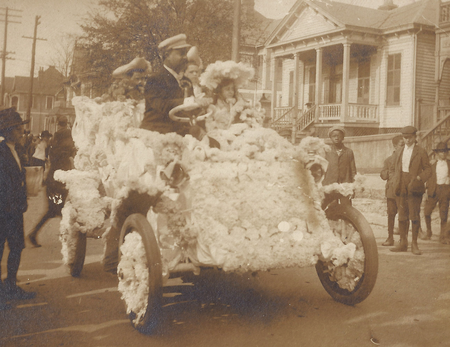 Mobile Has Canceled Mardi Gras Before

Editor's Note: This is an updated version of a story that first appeared in the 2013 issue of Mobile Mask magazine:

Faced with the uncertainty of what the COVID-19 virus will do and how we will continue to respond to it, many have wondered what might become of Mardi Gras 2021.

So far, nearly all of those who make Mardi Gras happen have operated as if it will go on – they have no choice. If, in fact, Mardi Gras goes on as scheduled (Fat Tuesday is February 16, 2021), floats, costumes, and the like must be ready to go.

Some have asked what, exactly, happened to Mobile Mardi Gras during the Spanish Flu pandemic years of 1918 and 1919.

Mardi Gras was canceled those years in Mobile and New Orleans, but not because of the flu.

It’s war that has twice halted the celebrations in both cities.

During World War I, then referred to as The Great War, Mardi Gras was officially canceled in 1918 and 1919. And during World War II, there were no parades from 1942 through 1945.

Scanning newspaper accounts from 1918, it’s easy to see the disappointment, though everyone seemed to recognize that it was not a time for frivolity. The Mobile Register, under a small headline “A Mardi Gras Lapse,” wrote on February 12, 1918: “For the first time in near 50 years, Mobile sees Shrove Monday and Tuesday pass without any distinctive celebration. … War is here, and all our forces are mobilized to help the country prepare to make a winning fight. At such a time, there is no room for the festivities usual at the Carnival season.

“… No doubt, when peace returns, we shall see Joy recondescent in greater splendor than ever.”

That was not to say that all get-togethers were abandoned. It was reported in late January 1918 that “The only ball this Mardi Gras season will be the one given by the Mobile Chapter of the American Red Cross.” Attendees were asked to contribute money and soft clothing for wounded soldiers.

The famed Athelstan Club threw an informal dance in early February. “This dance is the substitute for the brilliant Carnival ball the Athelstan Club always gives the Friday preceding Mardi Gras,” it was reported. Only sandwiches and grape juice and punch were served at the dance, and the only decorations were large American flags with 26 stars, indicating the members of the club who were serving in the army and navy.

A couple of mystic societies held their fancy dress balls during the war years, as well.

The Comic Cowboys held its annual meeting in late January, where the crowd was told: “No doubt you all have heard of the meatless days, wheatless days, heatless days, and lightless nights, but the most important has been sadly neglected, and that is the sleepless nights. My prescription for this is as follows: Eat one dozen fried oysters, one bowl of lobster salad, two slices of lemon pie, the hind leg of a goose, four spare ribs broiled in butter – if they can be spared – two or three cups of strong coffee, and, by all means, don’t eat soda crackers, but eat bread.” Clearly, at least the imagining of excess continued to be a part of the Carnival observance.

Shortly after Mardi Gras 1918, the flu tore through the state of Alabama, killing an estimated 12,000 residents in that year alone. At the same time, in Mobile especially, the work of supplying the war machine went into overdrive. Many of those who were not in the war itself were involved in some way on the home front.

Following the war, as preparations were being made for Mardi Gras to resume in 1920, the Board of Health “suggested” that all festivities be canceled because of the Spanish Flu. The City Commission refused, but between the flu and the fact that they were all a little rusty, Mardi Gras would be trimmed down, commissioners said.

Besides, the mystic societies had a whole other worry that year: Prohibition went into effect on January 16, a month and a day before Fat Tuesday.

On February 1, 1920, the Mobile Register announced that Mardi Gras festivities would resume. Fat Tuesday was just over two weeks away – February 17. “From now on, Mobile will take on the Carnival spirit,” the paper reported. “His imperial majesty, Felix, Emperor of Joy, has already been in communication with the Carnival Association. He called upon his loyal subjects to rally to the standard by uniting heartily and enthusiastically into the spirit of Mardi Gras.”

King Felix III that year was F. Taylor Peck, and his queen was Dorothy Wefel.

It was first announced that all Mardi Gras activities would be contained to Fat Tuesday only, but as it turned out, the Infant Mystics paraded on its usual Monday night before Fat Tuesday. One newspaper reported that “throngs lined everywhere” for the parades that year.

Some events, such as the public coronation of the Queen, did not go on that year. The coronation was held at the Battle House Hotel, during the Infant Mystics ball on Lundi Gras, February 16, 1920.

By that time, the flu was not completely over, but the numbers had fallen considerably. The Board of Health reported 1,741 flu cases in the city on Lundi Gras – up from 881 a week earlier. Mobile’s population at that time was just over 60,000.

On Fat Tuesday, the day parade – made up of King Felix III, the Knights of Revelry, and the Comic Cowboys – rolled before a large crowd, but the Order of Myths parade set for that night was canceled because of rain.

Shortly after December 8, 1941, when the United States declared war on Japan, the plug was pulled on Mardi Gras 1942. That left a half-dozen debutantes, announced in the fall of 1941, without a court, and it left a number of floats without parades.

On February 15, 1942, two days before Fat Tuesday, one local newspaper noted that “yesterday was no different than any other Saturday, as far as Mobile was concerned.”

“Last Friday night, the Crewe of Columbus would have staged the first parade. Yesterday, there would have been a floral parade, an innovation of recent years. And last night, they would have crowned the Mardi Gras queen at the municipal wharf.

“Today the fireman’s band would be playing in Bienville Square, and the city would be crowded with visitors. Tomorrow the king would have his parade past a reviewing stand on St. Francis Street, and tomorrow night the Infant Mystics would stage their parade.”

“Tuesday would be the grand finale, with a citywide holiday, general masking, and parades by the Knights of Revelry, the Comic Cowboys, and the Order of Myths Tuesday night. Everybody would be happy, and the streets would be covered with confetti and serpentine.”

Instead, the story pointed out, on Saturday “the war influence was apparent, as always, in the presence of numerous soldiers, sailors, and shipyard workers. The atmosphere was one of bustle and business.”

In February 1944, the day before Fat Tuesday, Adam Glass & Co. ran a large advertisement in the Mobile Register. After three years without Mardi Gras, the ad must have tugged at some hearts to see the drawing of a young girl in a party dress and mask, surrounded by streamers, balloons, and monikers such as KOR and OOM.

“In normal times … Mobilians would be celebrating Mardi Gras,” the ad was headlined. Then it went on to say, “In normal times … Adam Glass would be bringing you all you desire in furnishings for your home. The radios, the electric refrigerators, the steel porch and lawn furniture. These and many other items that are not today manufactured or on which production has been drastically curtailed would be on display in our store … if times were normal once more.”

The ad concluded with a combination of prophecy and prayer: “That happy day of normalcy will come again, the day when war has become a subject for historians, when our men who fight have returned to the peaceful life they fight for.”

Similarly, in 1945 the Infant Mystics distributed a memento to the spouses of members. “But for Hitler and Hirohito, this would be the occasion of our 77th Annual Ball,” the note to the ladies read, “and we wanted you to know that we have not forgotten you or our forty-odd members in the service. We have definite plans for the day our boys come marching home, and we can again invite you to our party, which we are hoping will be our 78th Annual Ball.”

In early 1946, the Mobile Press-Register announced what most already knew or had surmised: “Mobile, Mother of Mystics, will discard her welding torch and overalls of the past five years in favor of torchlights and domino suits March 1-5, when she celebrates her first peacetime Mardi Gras since 1941.”

The story said the possibility of putting together a royal court was slim because so many eligible men were still in the service, there were no debutantes, and fabric was low in supply.

However, a King Felix III was found that year in the form of the Carnival Association’s treasurer, J. Roy Albright. His queen was Alletta Lyons, whose mother was queen in 1923, just a few years after World War I.

In an Ash Wednesday editorial, the Press-Register stated, “Mobile’s traditional fame as Mother of Mystics was upheld magnificently by the Carnival celebration concluded last night.

“The results of this Carnival celebration give reassurance that Mobile will retain and expand its place in the Mardi Gras sun as the years go by.” 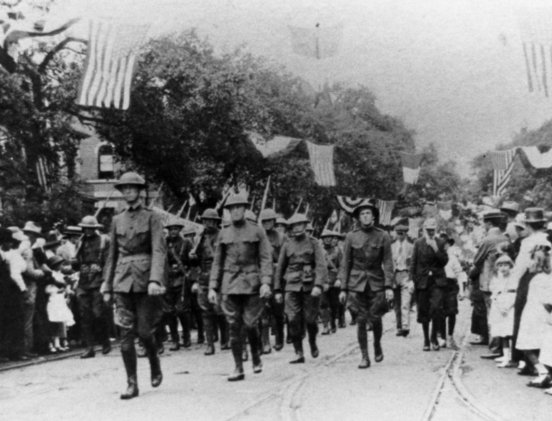